Norway, land of oil and paradox

With the results from Norway’s general elections last Monday, the impression of a land of paradox is reinforced. The conservative coalition has received a slim mandate to stay in office. 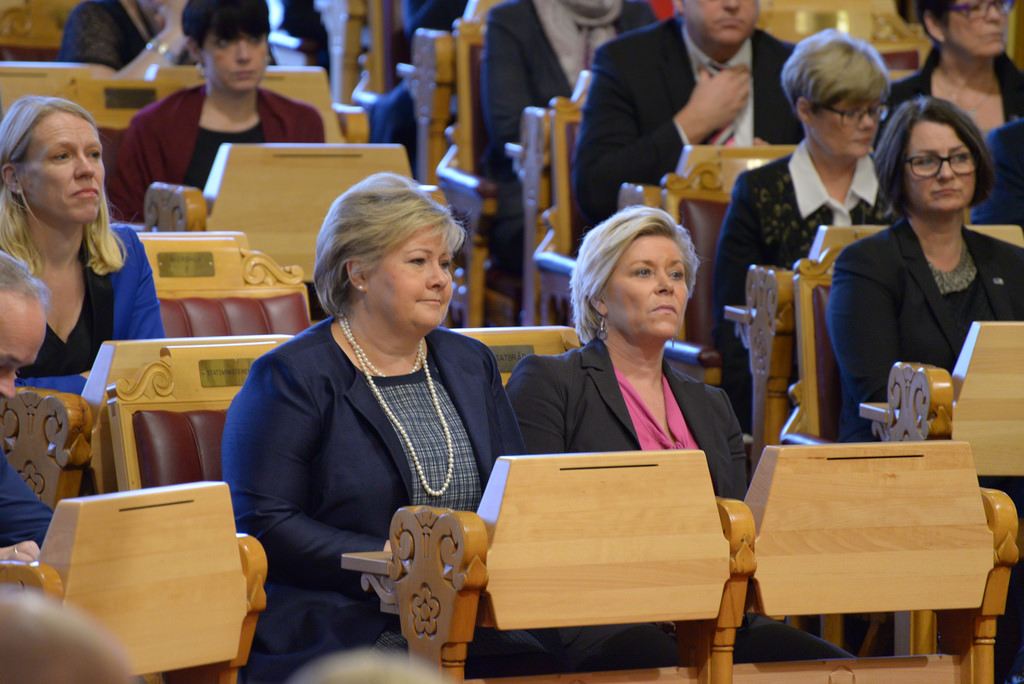 Norway is a nature-loving, environmentally friendly, extremely wealthy country, addicted to the oil that has made the country rich. In spite of much optimism of small green parties becoming kingmakers, the outcome of the election is not the change many were hoping for. Unless social mobilisation puts pressure on the larger parties to dramatically change their approach, we seem to be set for four years of increasingly striking paradoxes.

The biggest of the Norwegian paradoxes is climate/oil. The Minister of Climate and Environment, Vidar Helgesen, signed an agreement this summer with California’s governor, who is working to reduce greenhouse gas emissions locally in opposition to president Trump’s anti-climate policies. Meanwhile, local authorities in California have sued the Norwegian state-controlled oil company Statoil (and 36 other oil companies) for the damage caused by climate change to which the companies contribute.

The Norwegian state owns two thirds of the shares in Statoil. There has been no indication that the Ministry of Petroleum and Energy with Minister Terje Søviksnes at the helm, representing the state as shareholder, is exerting pressure on Statoil to transition from fossil fuels to renewables. While Statoil has set up a programme for new energy, and finally divested from tar sand, the Norwegian state has publicly refused to be a driver for this. The state as majority shareholder has repeatedly rejected the idea of using their majority vote in the general meeting of shareholders to ensure that Statoil withdraws from areas most harmful to climate and the environment.

As the issuer of petroleum licences the Norwegian state has managed to place Norway on the international scene as a country comparable to the US under Donald Trump. Norway has together with the US distinguished itself by ignoring very clear advice from climate scientists and other researchers, from economists and legal scholars (disclosure: including me), that petroleum exploitation in the Arctic is hostile to the climate and to the local environment, financially unsound, and in violation of international obligations and Norway’s own constitution.

After the Norwegian state last year was sued for violating its constitution in the 23rd round of licensing, the state responded by announcing the 24th round. Norway exhibits ‘cognitive dissonance’ between climate goals and oil action. When defending continued expansion of oil and gas exploitation, the Ministry of Petroleum and Energy has pushed this as environmentally friendly, as gas supposedly replaces coal. Ironically, this summer the state-controlled coal company Store Norske, which mines for coal on the vulnerable Artic island of Svalbard, has asked for more money from the state in order to avoid bankruptcy.

Leading Norwegian politicians have expressed concern about the development under Trump. But when it comes to petroleum, Norway is on a business-as-usual track. Yet, Norway is a member of two coalitions aiming to take the lead and ensure that we reach the goals of the Paris Agreement. In November 2016 the Minister of Climate and Environment signed the High Ambition Coalition. This year he also endorsed the Under 2 Coalition, adding that Norway looks forward to contributing its ‘money and expertise’ to this initiative.

Norway is a front-runner in being ambitious on paper, while being increasingly criticized, domestically and internationally, for opening up for new oil and gas exploitation in vulnerable areas in the North. Besides its electric car success, Norway is not doing impressively much to cut emissions in Norway either.

Another paradox is the use of one of the largest sovereign wealth funds in the world: Norway’s Pension Fund Global. With Ethical Guidelines and a Council on Ethics, Norway has managed to create an image of the Fund as a gold standard for socially responsible investments. With human rights, the environment, climate and anti-corruption in the Ethical Guidelines, one might be forgiven for thinking that the Norwegian Fund was a frontrunner in the area.

Indeed, the Fund has the potential to be a driver internationally for the necessary shift away from fossil fuels and onto a sustainable, renewables-based path. Although much good work is done by the Bank of Norway’s Investment Management (NBIM), we are still on an unsustainable ‘business as usual’ track.

NBIM itself suggested changes to their mandate, which could have been a first step in the direction towards more sustainable investments, but these were rejected by the Ministry of Finance. The changes were rejected because they were seen as too risky, both financially and reputationally, despite the prospect of very strong returns. The Minister of Finance argued that the fund’s focus must be the economic security of future generations, and it ‘should not be used as a tool for foreign or climate policy’. That the Minister of Finance can make such a statement, and that the majority of the parliament agrees, shows a lack of understanding for the interconnection between sustainable development and financial returns in the long run. This is itself a paradox in a highly educated society like Norway.

Well known for its beautiful nature and high environmental protection, Norway has also become known for desiring to kill its wolves, with the Minister of Climate and Environment under political pressure for actually following the Biodiversity Act and not sanctioning the culling.

Norway markets itself with its picturesque fjords to attract tourists. Yet Norway is among the few countries in the world that allows dumping of mine waste in fjords, and voted against an international ban on dumping of mine waste in the sea, proposed by Russia and China. In the famous Geiranger fjord, there is so much pollution from cruise ships that a British tourist this summer sent a letter of complaint to the Ministry of Climate and Environment.

In addition to beautiful nature, Norwegian quality fish is an export industry that the Norwegian state is proud of marketing. At the same time we appear to have a farm fish industry out of control, and in the free and egalitarian Norway, academic freedom for speech for marine researchers is under pressure – not only from the farm fish industry, but also from the Minister of Fisheries.

Identifying these paradoxes shows the contours of two Norwegian traits. First, a naïve faith that wealthy Norway can buy itself out of problems. Second, it shows a lacking willingness to take in new knowledge. The Norwegian state aims at achieving a fundamental transition to sustainability without being willing to undertake fundamental changes.

The government has been called out on these issues repeatedly. Many had high hopes for a new parliament that would provide the basis for a fundamental shift after the elections. The Greens looked at best as coming in with nine representatives. Instead, while the Conservative coalition took some losses, and the left except for Labour managed to keep or increase their representation, the changes were much less than the polls had indicated. The clear winner is the agrarian Centre Party, which has gone up nine seats to a total of nineteen, with its anti-wolf, pro-district campaign and a lukewarm approach to climate change mitigation.

It remains to be seen who will join the right wing minority government as negotiations have barely begun. Whichever coalition we get, it will most likely need to seek support in parliament on a case-by-case basis, which may curb the most reactionary policies but also prevent more radical ones.