Norwegian bank DNB has, after massive pressure from civil society and media, decided to withdraw its investments from the Dakota Access pipeline project. – With proper due diligence, DNB probably would have not been there to start with, Professor Beate Sjåfjell says. 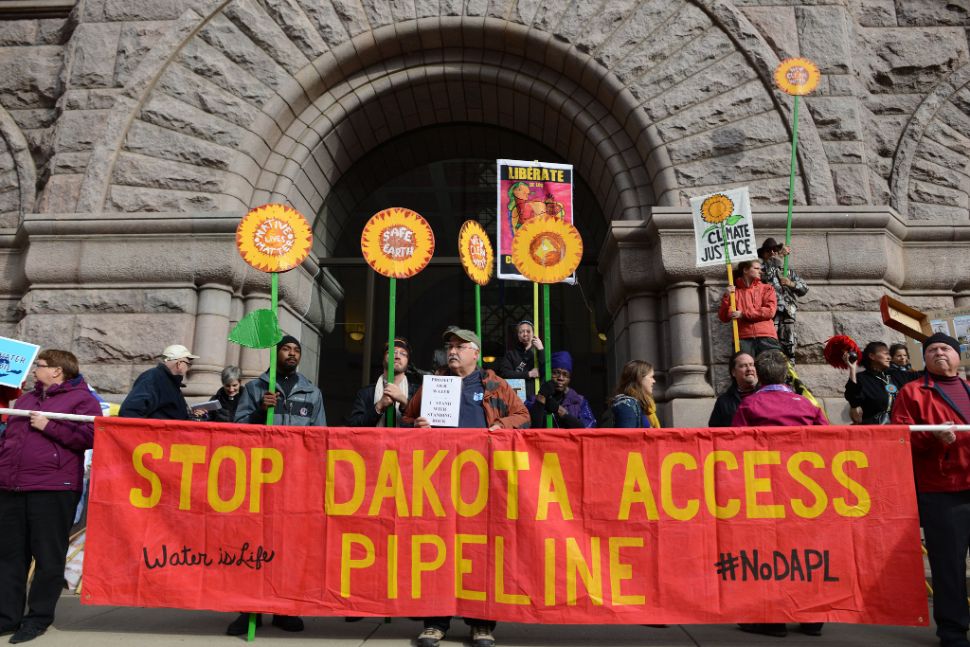 About 200 people gathered outside Minneapolis City Hall to protest the Dakota Access Pipeline. The planned pipeline will transport 470,000 barrels of oil per day 1,172 miles from North Dakota to Illinois. Protesters called for a stop of the pipeline construction which will pass upstream from the Standing Rock Sioux Nation. Along with the threat to their water supply, the tribe claims the pipeline will destroy burial sites and sacred places. Photo: Fibonacci Blue.

This case illustrates two points: firstly, the impact civil society and the media together can have when putting pressure on large financial institutions like DNB. Secondly, DNB’s involvement in the Dakota Access pipeline appears to illustrate a lack of environmental and human rights due diligence, which should have raised a number of red flags.

DNB is Norway's largest financial institution with the Norwegian state as its largest shareholder. Despite the bank’s claims that they contribute to sustainable development through their activities, DNB is amongst the last of the Norwegian financial institutions to withdraw from the Dakota Access pipeline – an economically, socially and environmentally controversial project.

We know that channeling capital in the right direction is essential for achieving the global goals of becoming a sustainable zero-emission society. Whom financial institutions lend money to or what kind of projects they invest in determines our common future. The small country of Norway has, thanks to its petroleum-based economy, the financial clout to start paving the way for a new direction in international investment. Norwegian financial institutions, notably those that are wholly or partially controlled by the Norwegian state, should be frontrunners. Proper due diligence, to stay out of unsustainable projects, should be an obvious first measure. Instead, the controversy over the Dakota Access pipeline is a grim reminder of how also Norway’s largest financial institution appears to be stuck on the ‘business as usual’ track.

The Dakota Access pipeline is being built to transport oil from fracking. Fracking does not belong in a scenario in which most of the already known fossil resources must remain in the ground if we are to reach the targets set by the Paris climate agreement. The pipeline is not only deeply problematic from a climate perspective, but also socially and environmentally. The UN Special Rapporteur for indigenous rights reacted to the lack of consultation with the indigenous peoples that inhabit the land that the pipeline is being built through. The expert report included claims that the pipeline puts drinking water at risk. The pipeline has also received strong international criticism amidst claims of police brutality and attempts to curb the press by shooting down their video drones and charging journalists with felony charges for covering the protests against the pipeline.

DNB has been heavily involved in the Dakota Access pipeline, with billions of Norwegian kroner at stake in the project. The pipeline is difficult to reconcile with DNB's own policies and its declared aim to contribute to sustainable development. The Dakota Access pipeline is a very risky project for the bank financially, climatically and ethically, and the bank has been unable or unwilling to explain why the project makes for a sound investment.

There is no evidence of due diligence or any other kind of feasibility study before investment decisions were being made. According to its own website, DNB started asking questions to the involved companies once the story became international media fodder. When the story also hit the Norwegian media the bank released a press release saying it would look into the matter. After first only selling off its million kroner investment in the project after massive public pressure, DNB has now, months later, decided to also to withdraw its billion kroner funding to the project.

A thorough due diligence would have revealed that Sunoco Oil, which will operate the project, stands out as an offender in an industry that is controversial in the first place. The company has over twice as many reported oil spills as the average in the industry, with more than 200 oil spills over the past six years.

Prudent and responsible banking requires rigorous research before funding a specific project. It is hardly prudent or professional to consider a retrospective due diligence once the media has raised the alarm. It is unacceptable if the bank leaves it to the press to supervise its activities and only reacts when media pressure reveals involvement in what appears to be an obviously unsustainable and unethical project.

What can we expect from the rest of the international financial community if this is the standard of Norway’s largest financial institution, with the Norwegian state as the largest shareholder?